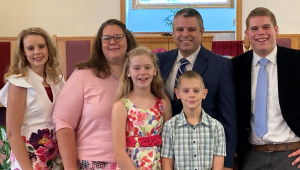 Pastor Nelson Newman and his family are from the Chambersburg, PA area. Pastor and his wife, Brandi, were high school sweethearts and were married in May of 1998. They have four children: Pearl, Reed, Lilli, and Levi. Pastor Newman served 7 years in the United States Navy immediately out of high school, stationed right here in Hampton Roads at Little Creek Amphibious Base for his first tour. Pastor Newman was working to advance his civilian career with the federal government when God called him to full time ministry early in 2011. Pastor Newman received his Master of Ministry degree from The Crown College of the Bible in Powell, TN and then went on to receive his Doctor of Philosophy degree in Christian counseling from Louisiana Baptist University in Shreveport, LA. In 2016, he began Arise and Declare Ministries (www.AriseAndDeclare.com) writing several resources and starting an “Iron Sharpeneth Iron” outreach and discipleship ministry. His family moved to Enterprise, AL in February of 2016 to serve bi-vocationally as Associate Pastor of Faith Independent Baptist Church. There he implemented his knife ministry to minister to the soldiers of Ft. Rucker and helped the church build a thriving bus ministry. On June 28, 2020, Pastor Newman accepted the call from Filipino Independent Baptist Church to be their senior pastor. Pastor Newman’s main desire is to see a revival in our nation and to be used of God to be a part of it. He hopes to lead Filipino Independent Baptist church to not only reach the Filipino community around us, but all of Hampton Roads with outreaches to the military and local college campuses, as well as tried and true door-to-door soul winning.

Nursery is provided for all services.